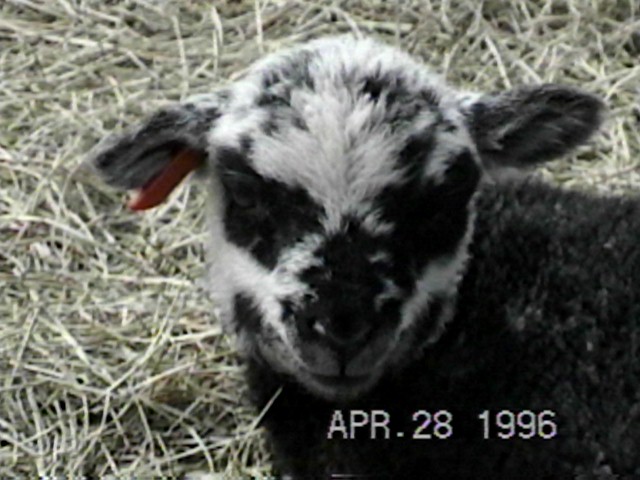 All our sheep are docile and easy to handle. We feel a sheep's temperament is more a function of management than a breed. We check the sheep three times each day. Somewhere during each day, each sheep gets some personal attention. Also, we handle them a lot as lambs. Yes, this takes a great deal of time but we enjoy what we do. Weighing, trimming, hooves, shearing, rotating to other pastures becomes fun instead of an ordeal!

The Shetland's roots go back over a thousand years, probably to sheep brought to the Shetland Islands by Viking settlers. They belong to the Northern European short-tailed group which also contains the Finnsheep, Norwegian Spaelsau, Icelandics, Romanovs and others.

Today they are considered a primitive or"unimproved" breed. This means that although they are small and relatively slow-growing, they maintain natural hardiness, thriftiness, easy lambing, adaptability and longevity. Shetlands survived for centuries under harsh conditions and on a meager diet, although they do very well under less rigorous conditions. Having retained most of their primitive survival instincts, they are easier to care for than many of today's "improved" breeds.

Shetlands are one of the smallest of the Britishsheep. Rams usually weigh 90 to 125 pounds and ewes about 75 to 100 pounds. Rams usually have beautiful spiral horns whereas the ewes are typically polled. They are fine-boned and agile and their naturally short, fluke shaped tails do not require docking.

They are a calm, docile and easy-to-manage breed. Most respond well to attention and some even wag their tails when petted! In addition, the rams are usually safe to be around.

Classified as endangered by the Rare BreedsSurvival Trust (RBST) in 1977, Shetlands are now enjoying renewed favor and numbers.

With the assistance of the RBST, Col. Dailley of the African Lion Safari in Cambridge, Ontario, Canada, imported 28 ewes and 4 rams from the Shetland Islands in 1980. This is the only importation of Shetlands into North America documented by the RBST. Due to tightened importation restrictions, it is unlikely that any more can be brought in during the near future.

Tut and Linda Doane of Vermont brought the first Shetlands into the U.S. from the Dailley flock when the 5-year-old offspring of the original imports were finally released from quarantine in 1986. Currently, only about three thousand Shetlands exist in all of North America.

A very important characteristic of the Shetlands is their beautiful wool, upon which the world-renowned Shetland woolen industry is based. Shetland wool is one of the finest and softest of any British breed, with a Bradford count usually in the upper 50's to lower 60's and an average fiber diameter of 23 microns.

This soft, yet strong and durable wool is a delight to spin and is ideal for knitting. It was traditionally used in Shetland shawls so fine they could be drawn through a wedding ring!

Fleeces usually weigh between 2 to 4 pounds and have a staple length of 2 to 4.5 inches. Occasionally, the wool will shed in late spring as it did generations ago when it was "rooed" or plucked off by hand.

Shetland wool comes in one of the widest ranges of colors of any breed. Besides the white, which dyes very well, other colors include light grey, grey, emsket (dusky bluish-grey), shaela (dark steely-grey resembling black frost), musket (pale greyish-brown), fawn, moorit (shades between fawn and dark reddish-brown), mioget (light moorit), dark brown and pure black. There are these 11 main colors as well as 30 markings, many still bearing their Shetland dialect names.

Unfortunately, many of these colors and markings have become quite rare as white wool is dominant and has historically commanded better prices.

Other Websites of Interest

Oklahoma State University has a wonderful collection of information on most breeds of sheep raised in North America with lots of data and color pictures of each breed.

The Shetland Wool Brokers also have some great information and pictures about Shetland sheep and wool.

Return back to the home page